The bestselling, award winning Saga by Brian K. Vaughan and 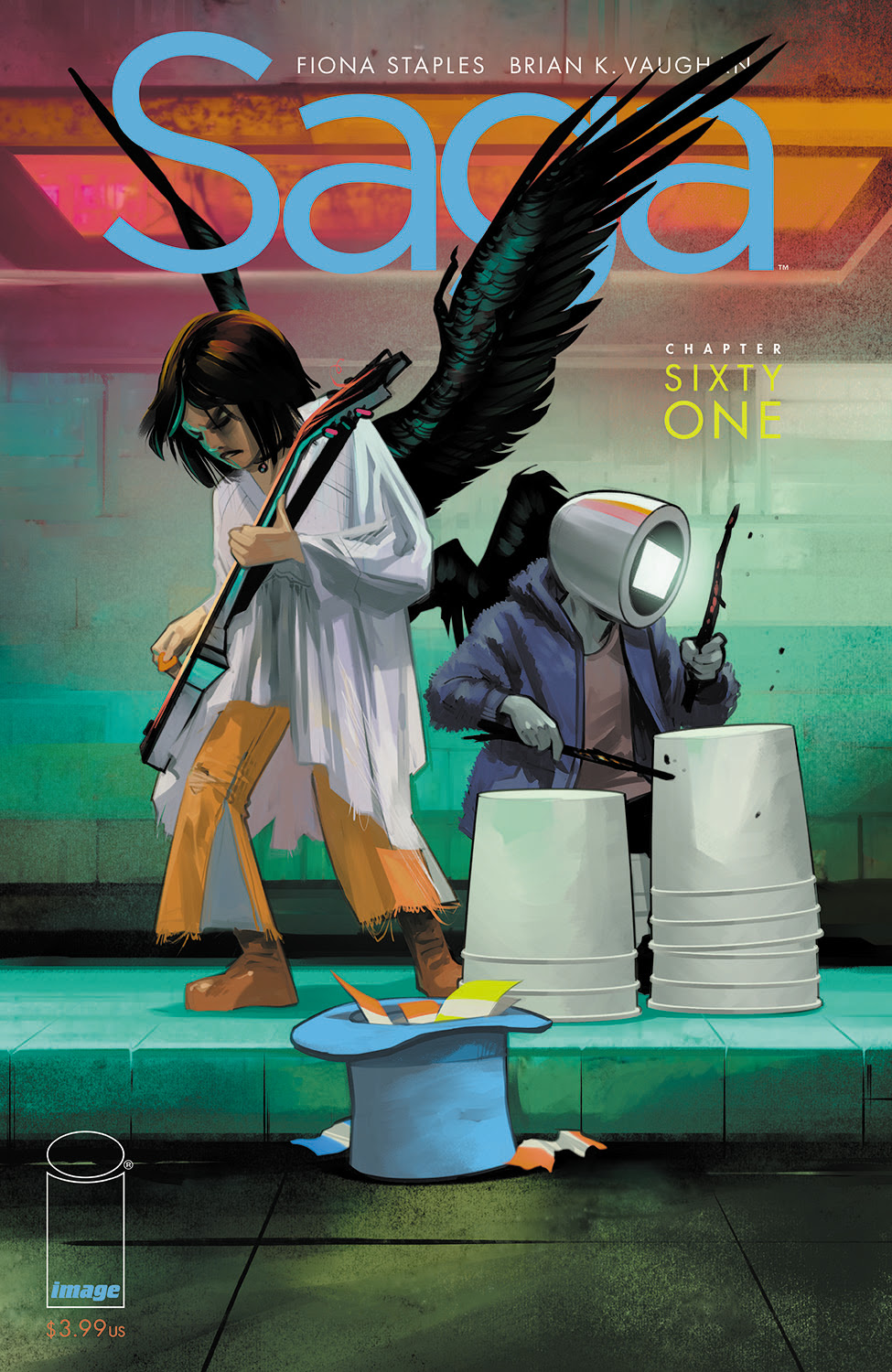 Fiona Staples will kick off a highly anticipated new story arc in January 2023 from Image Comics.

“We’re back! No spoilers, but Fiona and I are extremely excited about some of the familiar faces returning in this shocking new ‘season’ of Saga,” said Vaughan. “Times might be tough for Hazel and her family, but the best is yet to come.”

In the upcoming Saga #61, readers are treated to another epic season of emotional adventures and shocking surprises for Hazel and her star-crossed family. It will pick up where the recent Saga, Vol. 10 trade paperback release (collecting Saga #55-60) left off.

The Saga series has sold seven million copies to date across single issue, trade paperback, compendium, hardcover, and digital editions and has been translated into 20 languages. The series also boasts many awards including Harvey Awards, a Hugo Award, British Fantasy Award, Goodreads Choice Award, Shuster Award, Inkwell Award, Ringo Award, and has the record for most Eisner Award wins in the “Best Continuing Series” category. It has been featured in such mainstream media outlets as TIME, Entertainment Weekly, The Atlantic, NPR, and more. The series has become a pop culture phenomenon and has been immortalized with references and easter eggs appearing in such popular TV shows as Supernatural, The Big Bang Theory, The Simpsons, and even a recent Taco Bell commercial featuring the characters dressed in cosplay.

Saga is also available across many digital platforms, including Amazon Kindle, Apple Books, and Google Play.

“While the book works as a poignant love story and an indictment of prejudice, trippy visuals and clever dialog make this Romeo and Juliet space opera a lot of fun as well.” —Library Journal

“Vaughan’s whip-snap dialogue is as smart, cutting, and well timed as ever… [Staples’] character designs dish out some of the best aliens around, the immersive world-crafting is lushly detailed and deeply thought through, and the spacious layouts keep the focus squarely on the personal element, despite the chaotic cosmos they inhabit.” —Booklist (starred review)

“The kind of comic that you get when truly talented superstar creators are given the freedom to produce their dream comic…Saga is Heavy Metal eclecticism synthesized into a singular, sprawling narrative à la Cerberus or The Walking Dead—a vast sandbox built for never ending castle-building.” —Entertainment Weekly

“An unwieldy, profane, and glorious ode to compassion and equality… a sprawling tale that shuffles the beats of numerous genres, including pulp romance, road trip, Western, dark comedy, and political thriller.” —The Atlantic

“There are two kinds of people in this world: Those who are reading Brian K. Vaughan and Fiona Staples amazing adult sci fi/fantasy Image comic Saga, and those who haven’t yet. The former people are leading happier, fuller lives, because Saga is amaaaaaazzzing.” —io9/Gizmodo

“Saga is the space fantasy comic of our times.” —BookRiot

“The humanity that BKV imbues on his characters is rich and relatable, and the danger that surrounds them is fierce and ever present.” —IGN

Back to Top
%d bloggers like this:
We use cookies to ensure that we give you the best experience on our website. If you continue to use this site we will assume that you are happy with it.Ok