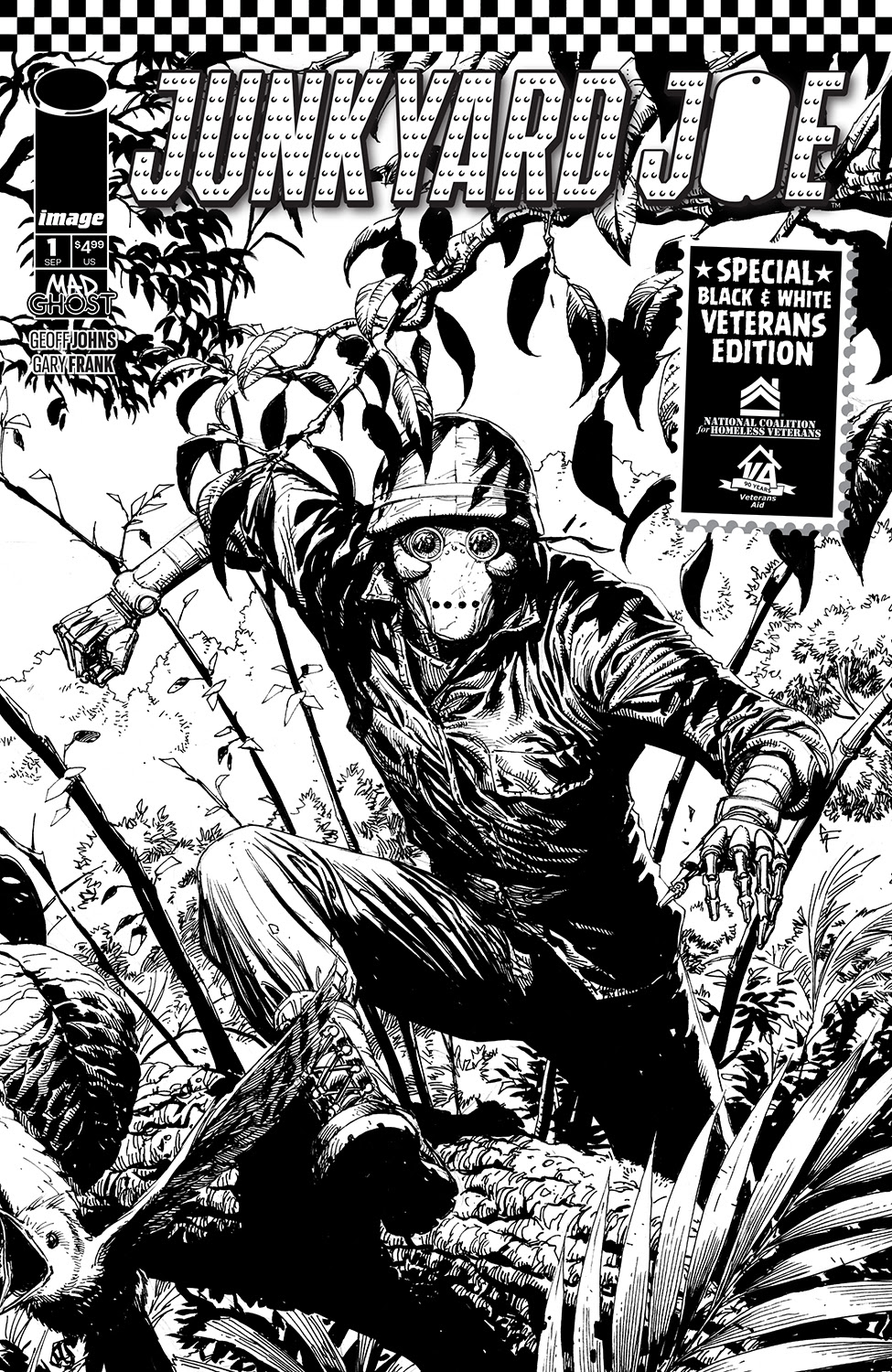 Brad Anderson reteam for an all-new series in the upcoming Junkyard Joe, telling the story of a mysterious robot soldier and the cartoonist who he believes created him. Expanding Mad Ghost’s historical universe of heroes known as The Unnamed, this explosive new story is set to launch from Image Comics this October and will feature a special black and white edition to benefit veterans.

Proceeds from the Junkyard Joe #1: Special Black & White Veterans Edition will be donated to the National Coalition for Homeless Veterans in honor of Johns’ grandfather and to Veterans Aid in honor of Frank’s grandparents. All three served during WWII.

Junkyard Joe strives to highlight veterans’ perspectives through a comic book lens and raise awareness and funds to support NCHV and VA, two of the leading charitable organizations committed to ending veteran homelessness in the US and UK, respectively.

“My grandfather served during World War II and it changed his life forever. Junkyard Joe felt like an opportunity to raise not only visibility for these two amazing veteran organizations, but real financial support. It’s an honor to be working with the NCHV and VA,” said Johns.

“There are people out there who risk everything to protect us and, all too often, find that society isn’t there for them when they return. I’m grateful for the opportunity to help raise awareness of the work done by some of the people and organisations who remember and repay our debts to those who serve,” added Frank.

NCHV’s CEO Kathryn Monet said: “NCHV is honored and grateful to be a part of Junkyard Joe. It is wonderful to work with such legendary figures in the comic world to raise awareness for the issues veterans face, and our work to end veteran homelessness simultaneously. We thank the Junkyard Joe team for including NCHV in this unique project.”

CEO of Veterans Aid, Dr Hugh Milroy, said, “We were surprised and delighted to be beneficiaries of this unusual venture and deeply moved by Geoff and Gary’s commitment to honouring the veterans in their own families. The bond that unites those who have served is special and although readers of Junkyard Joe will probably never meet the former servicemen and women helped by their donations, they too will have done something special in enabling us to restore independence and dignity to their lives at a time when they most need it.”

From the beloved pages of Geiger comes the story of Junkyard Joe. The world knows him as the comic strip by cartoonist Muddy Davis, but the truth stretches back to the Vietnam War. This is their story of sacrifice and brotherhood. Throughout history, unlikely and strange heroes have risen and fallen, their identities and lives a secret. But for a Great Evil to be stopped, their stories must be told. They are The Unnamed fighting The Unknown War.

Junkyard Joe #1 will also be available across many digital platforms, including Amazon Kindle, Apple Books, and Google Play.